"On Monday the 14th December 2020 there were many reports that lights have been seen up and down the East and North Yorkshire coast. I also have one report of multiple lights seen low over fields on the Wolds between Cottam and Langtoft. (A few miles inland from the Bempton - Bridlington coastline.)

Moreover, an amateur photographer from Leeds called Brian Lancaster managed to capture a sequence of lights as they appeared over the sea off Flamborough North landing. Thsi amazing photograph (below) was taken quite by chance as he took night shots from the clifftops.

Brian told me that the sighting lasted no more than 15 to 20 sec , “I was shooting a 30sec exposure; the sequence of lights was: a single orange light, then a 2nd light, then a 3rd light, as seen was from right to left. The time was 21.15

Brian’s picture is I feel of importance because it can rule out many things. For instance if these were the lights from jet aircraft over the sea there would be motion blur, the same can be said for flare dropped from aircraft or fired from boats."

"On Tuesday the 15.12.20 I visited Bempton hoping to film the lights that had been seen along the coast. I took with me my Sony NX80 camcorder in the hope that I might capture them on film. At approximately 7.15pm a single orange light appeared over the sea, seconds later splitting and becoming two separate objects.

The whole sequence of events lasted no more than 5 seconds. I was unable to capture them on film due to the speed they appeared and disappeared.

Over the next hour they appeared three more times. The lights were also seen at Hornsea and further up the coast towards Scarborough."


There is a report of more activity which has reached Paul today (16/12), from a friend, Billie:

"Here is what I saw.

I was driving in my car from Whitby to Sandsend. It was dark. The time was - I'm guessing - about 4.30pm-ish. I noticed a bright white light over the sea not far from the beach & it was moving. It wasn't high. There were boats in the water, so their crew must have seen it. When I went round the bend near the Hart Pub I couldn't see it. I don't know where it went. xx" 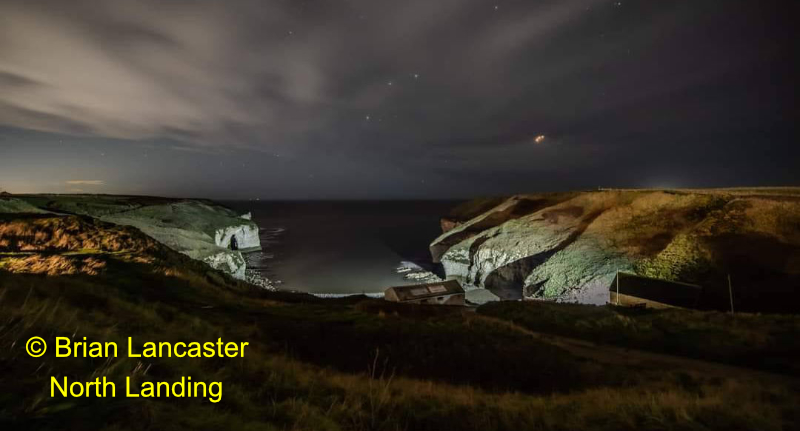