experience by Paul Sinclair and friend7/7/2003

from contemporaneous notes by Paul

Whilst driving home from Malton with a work mate in 2003, little did we know that that day we were soon going to see a UFO of huge size.

The Malton to Sledmere road goes across country to the east of York. I was driving that day and turned off the Sledmere Road and was heading home towards Bridlington. To the right of us, and low in the sky was a white object that could only be described as huge. We stopped the van and watched in amazement as this long white pulsing UFO hung silently in the sky above a field. There was no other way to describe it. It was clearly not part of the sky, as in a cloud. But it did not fit into anything that we could recognise as being man made.

It made no sound and really was an unbelievable sight. It was only 4 in the afternoon and the sky was still blue and clear. My passenger who was in no way a believer in UFOs, and had in the past found great amusement at my enthusiasm for the subject, could not believe what he was seeing. I urged him to tell me what he thought it was so there would be no mistaking it for a plane or a trick of the mind the next day.

The next day however, Chris did not even want to talk about it. It seems that disbelief in this subject is a mindset that is still hard to change even when the truth of UFOs smacks an individual full in the face.

I would say the object hung in the sky for around 5 minutes and was pulsing what seemed to be waves of white light.

Then it simply disappeared; one second it was there the next, gone.

It was however a great sighting. We were not the only people to have seen this on that road. The Hull Daily Mail also had a report from a couple traveling to Bridlington for their holidays who saw much the same thing. [Hull Daily mail Wednesday August 13 2003]


Over the years I [ Paul Sinclair] seem to have had more than my share of UFO sightings. These objects are often nothing more than brilliant balls of light, however they do appear to be under intelligent control. To me this is proof. Full stop! That and no amount of explanations from sceptics and plasma enthusiasts will change my mind. If you ask, where do I think these objects originate from, I could not answer.

A similar sighting 12 years prior in a newspaper report:

"A couple claim to have seen a UFO at the exact spot that another Free Press reader spotted one - only 12 years ago. In August, the Free Press reported that Paul Sinclair of Bridlington saw a white glowing object hovering above a field near Sledmere on the B1253 Sledmere to Bridlington, which suddenly disappeared.

Since then, 'John Smith' has written to the Free Press to say he and his wife saw a similar object on the same stretch of road in the summer of 1990 during a car journey to Bridlington.

Mr Smith, of Heber Street, Goole, said: "As we traveled along I noticed a flash of silver in the sky above the car and told my wife to look at the glider. She immediately said 'no it's not a glider, I don't know what it is'." Mr Smith said he stopped the car, got out and saw a large silver disc in a field, hovering above some trees. There was no sound whatsoever, and after a minute or so it just disappeared, not appearing to move from its position, more as if a curtain had been drawn round it." 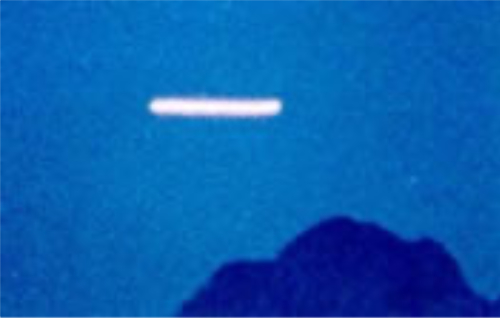 Paul: This picture is as close a likeness as I can find to what we saw.