At the time of writing these notes it is December 2020 and we are getting a number of credible reports and photographs of lights down the coast from Scarborough down to Bridlington, which of course includes the now notorious coastline at Bempton.

Below are simply some notes taken over past years of quotes by folk who have encountered this phenomenon.


Interestingly,
Peter Davenport of Nufoc has recently published his reported sightings for December 2020. A high proportion seem to be spheres, lights or orbs. Perhaps the phenomenon is brave enough to fly out of Yorkshire from time to time. Paul. 22/1/21

"OK, the lads was fishing at Flambrough, North Landing about 3 weeks ago when something caught my eye which looked to be maybe 5 -10 miles away but...

They were only there about 10 seconds then they went & came back about 10 minutes later.

I don't know if i believe in all that b***ocks, but that is what i saw. Anyone else ever seen owt strange?"

Paul commented: ...an example of UFOs seen over the sea again, and no one can accuse these guys of having any interest in the subject. It is so interesting where and when you find UFO reports. The above and below text is from the Whitby fishing forum which is a wealth of UFO information. And what makes it even better is the fact that these guys don't have one ounce of interest in UFOs.

Here are some of the other comments posted on the Whitby fishing forum:-

"I have seen them a few times fishing at Aldbrough [south of Bridlington]. and in exactly the same sequence [described above]. No way they are planes"

"Last time I saw them was the Thursday night before the Bridlington Open Fishing Championship. I tried to video them on my phone but it didn't pick them up."

"A few people from Bridlington have seen them when fishing at night tried to take pictures of them."

"When fishing last Tuesday, me and Si were at Runswick, and we looked out to sea and saw these lights (orange looking) about 5 or 6 of them strobing on and off at all different levels. We wondered what the hell they could have been.

It was windy, so we heard nothing, and they were well off the coast. So I don't know what they were but we saw them for sure."

"But I have seen the 5 orange lights on a few occasions out at sea. It's very odd."

"I know we've got a lot of rigs 'n drilling platforms up and down our coast - and for so many people to see them it must be a common occurrence."

"We see them nearly every Wednesday night in exactly the same spot every time. None of us in Bridlington club can explain them. They are not the after burners from jet planes, nor, to my mind, are they flares. They could however be the flares that fighter jets put out to distract missiles as they usually put out around four or five of these things"


"I have seen some strange things whilst fishing including an orange light in the sky whilst down at Bempton a few weeks back!! I nearly rang the coastguard in case it was a distress flare, I told 'Jellyworm' that I was going to if I saw it again."

"I did see a pair of Apache attack helicopters on the bombing ranges at Donnas nook last year; they were firing missiles on the targets and then shooting a big fan of anti surface to air flares before flying off and around to do it again - amazing sight to see !!"

"I remember being on the north gare one winter with a few of me mates. The weather was similar to what were having now, snow stormy, and I remember it snowed.

Then after it had stopped there was like neon and fluorescent coloured droplets, dropping off our rods. The strange thing is, it was only on our rods; it hit the floor then dispersed."

"Yeah, I was with 'Cass' last Tuesday and I did see the lights also on the Wednesday. I saw what looked like a firework or a flare going off over near Kettleness point. Very strange !!!"

"I've not seen the lights since early October, but like Steve says, a lot of Bridlington lads have seen them".

"I saw these lights about a month ago while fishing at Cloughton. They were a long way off but seem exactly as you described. They remained very steady and varied between one and three. It went on for about 5 minutes."

There are more documents and accounts like this but the above batch seems quite typical. I also have a first hand report from a Mr Darren Yoginesn who told me about seeing the lights whilst fishing at North landing. He told me he saw 5 of them going on and off in a strange sequence. He says the seas were very rough and that they were about 4 miles out. He called the coast guard who sent a patrol car out to him to check he was a genuine caller. We assume that they must have been seen by the coast guard station also, due to the fact that the lifeboat was sent out to investigate and the sea king helicopter also! They reported back to Darren that no ships were in the area, no planes were in the area, and no rigs were any where close by. So by their own admission they ruled out all of the most likely explanations for the sighting.

"various friends and unknown fishermen whom we thank." 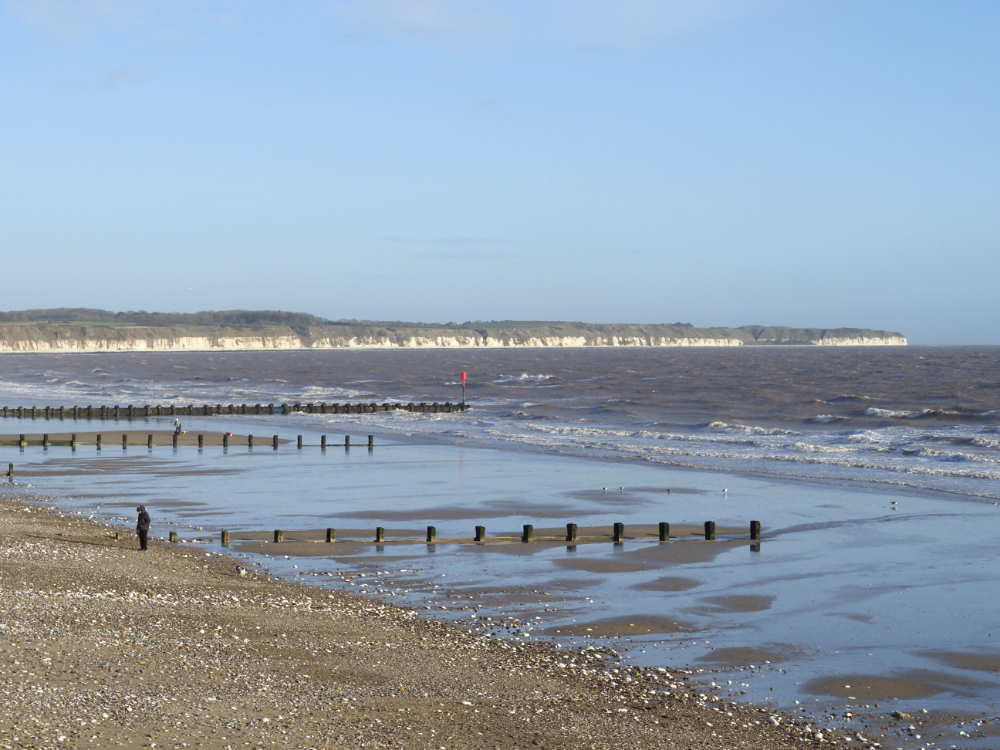 View from the beach at Bridlington looking north