A few weeks ago I was talking to Steve Ashbridge, a good friend of mine who has spent countless hours with me on the East Yorkshire wolds hoping to get a glimpse of the light forms.

It was during that conversation that Steve reminded me about the hedge lights.


A few years ago UFO activity on the wolds was so frequent that this part of the phenomena was placed on the back burner. One of the first locations that we observed the light forms was from the cross roads of Langtoft, Acton, Butterwick and the long straight road that took you to Sledmere.

It was on the Sledmere road that we observed the hedge lights.

The only house on that road was a farm that was set back from the road about 500 yards. The distance from the cross roads to the horizon was about a mile of road with nothing else in between. It was while waiting at the cross roads hoping to see the wolds light forms that the hedge lights would appear.

Steve saw them first one night early in 2008. The road has a hawthorn hedge of varying height along its entire length on the right hand side; we would park on the Butterwick road, just off the main road at the other side of the hedge looking out onto fields and the farm far in the distance.

I remember Steve pointing to lights low down in the hedgerow - white and red about half a mile away. He said he thought it was someone on a bike coming up the road towards us. I had to agree, now on reflection we knew it could not have been. We were looking at a white light that if it had been a bike would have been the front light - and red light? How could we have seen the back of the bike? We both walked out to the main road and waited; no light appeared - it simply vanished.

That same night a light slowly moved through the hawthorns like it was looking for something: the odd thing was that it did not illuminate anything around it. We were seeing this at the same time that we were observing the UFOs, the light forms were so exciting to view that we lost sight of how important these hedge lights might have been.

I now think that this was perhaps the closest thing to contact with the objects that we got. At times over the months these lights were within 30 feet of us. Pale white lights that moved slowly and deliberately throught the trees. I regret not making more of these objects; Steve was far more enthusiastic as I remember.

Many times we would jump into the car and drive down the main road at walking pace trying to find a source for the lights, as with all such sightings there was no logic to how or why they appeared. The only thing we know for sure is that they were always around when we were observing the light forms.

I have to be clear here and tell the reader that the main reason that the light forms took priority over the [hedge lights] was because they were so large and intense. When an object suddenly appears in the sky and hangs around for a while you tend to forget about things less illuminated. Anyone viewing the wolds footage can get an idea of this. The objects we were there to observe were always very bright and sharp, colours ranging from white to intense red with all the variations in-between. However the hedge lights were pale in comparison.

On a few occasions we saw small red ones and my daughter once saw a blue one over the top of the corn. That was during our first summer filming the objects. There is also a man who lives a few miles away who has a camcorder set up day and night, the cam looks over the countryside with an unrestricted view as far as the Sledmere road. Some of his footage is very interesting and many of the clips show the objects around this area. He has spent many hours observing these light forms. His footage shows all aspects of the phenomenon. Because he films day and night there can be no argument that the objects filmed are not above the ground. At times cars can be seen entering the frame left or right and there journey on the road below is also tracked. It is interesting to note that on most occasions the UFOs vanish and reappear when the vehicle has gone.

So what are the hedge lights? They do appear to be interested in something around this area of the Wolds. I don’t think for one second that they are military or man made. We have noted however that helicopter and plane activity increases after they appear. But nothing manmade could simply appear out of thin air like these things do. The hedge lights are so odd; we would see them slowly moving under the trees, one side of the hedge then the other.

Steve has actually gone out over the field on a few occasions and like ghosts they vanish as he arrives at the point where they were. That to me implies some sort of intelligence on their part. Although it is hard to conceive that they might view us as intelligence. I think we may have been more of a curiosity. When you think about it how could we interact with a much higher level of intelligence, or on the opposite end of the scale a much lower? We have to assume that what ever we are dealing with does not think the same way that we do. In fact the word "think" I feel is the wrong word to use. These objects operate on another level, it is obvious that if we knew what we were looking at we would have some kind of understanding of them. The simple answer is, we don’t know. 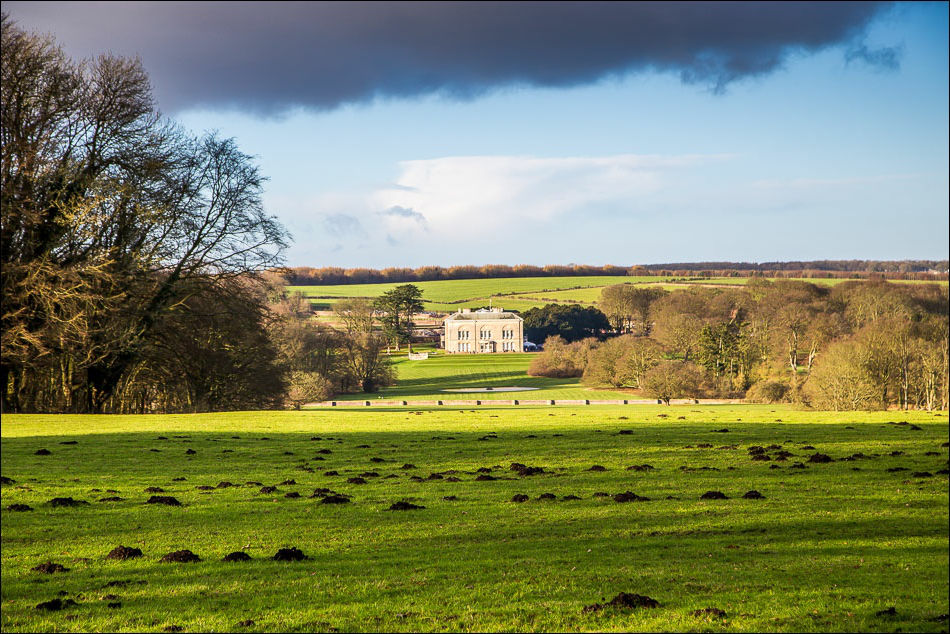 The countryside near Sledmere. Sledmere House is a well known tourist spot and stately home belonging to the Sykes family.