Hello, Thought this would be the appropriate place to record the details of an unusual observation I made on the evening of the 4th April 2007 at approximately 9.45pm.

I have had a passing interest in the UFO phenomenon for the past 20 years. Since I was a kid really, probably sparked off by Close Encounters, ET and the like. I mention this purely to establish that I have a basic knowledge of the field and some of the terminology. I am no kind of expert though!

I'll give you as much info as I can: I work in Hedon. I had finished working late and was driving home at around 9.45pm to where we live (on a farm) near Roos. [these villages are all in an area known as Holderness, and are not far from Hull.]

I drove out of Hedon on the Burstwick road. Just near the Weghill Rd turn off I noticed, in the sky ahead, a single solid red light. This was joined in less than a couple of seconds by another 2 identical lights. The lights appeared as if they had been switched on. The three lights formed a triangle giving the impression of a very large object, although I couldn't actually see any object as it was dark.

The sky was clear of clouds and the stars were clearly visible. It was a fairly dark night. Still driving, and with my heart racing slightly, I continued to watch the object/lights as they flew roughly south towards the river Humber. The way the lights moved suggested that they were connected. They stayed in the same formation and as they moved off into the distance they took a slightly upward path.

The lights were solid once they had initially "switched on". No flashing as you might expect from an aircraft. The lights also appeared considerably bigger than those which would be present on a light aircraft for instance. I was unable to judge exactly how far away the lights were, but I would guess that they were not closer than half a mile and no further away than 2 miles. Very hard to tell though. When I spotted the lights they were fairly low in the sky although, again, it's very hard to give an estimation.

I didn't have to raise my eye level much from my normal driving position. I didn't notice any kind of sound throughout the sighting. I had a CD on at first, but turned it off within a few seconds of the lights appearing. My journey continued on over Daisy Hill where I turned left onto the road to Burton Pidsea. I could still see the lights, though I was now driving in the opposite direction to them. The road meanders quite a bit, so I got a few very clear views over the next couple of minutes. The road dips slightly near the Elstronwick turn-off which is where I lost sight over the horizon.

It might also be worth mentioning that a couple of nights before, could have been Monday or Tuesday, at around 12.45am we had just gone to bed when we heard and felt a large and very low pitched boom. A worker who lives at the other end of the farm also heard and felt the noise.

I think that's as much info as I can give you right now, but if you have any questions I will be glad to answer them.........

correspondent wishes to be anonymous 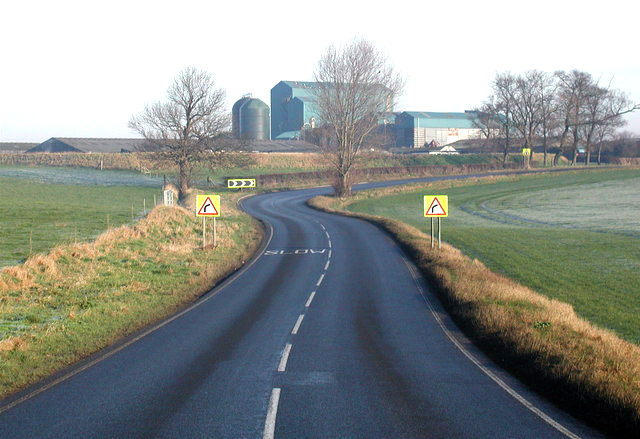 Typical flat countryside of the area, near to the River Humber and not far from Hull.