Paul: thank you very much "Ivan" for the vividness of your reports and your thoughtful analysis.

Hi Paul. First let me commend you on your excellent books. I have just finished reading them and found your research fascinating. Well done!

I have for many years been interested in such matters and I'm currently writing a book of fiction based on the phenomena.

I felt compelled to contact you to share three experiences I personally have had, and a number of my own thoughts!

The first was September 1993 in Aberdeen when I was fortunate to witness a silver orb moving slowly across the sky from the window of my flat. What caught my eye was the fact it periodically shone bright white, (incandescent) as it flew through the sky. It was daytime and I remember the sky was blue and cloudless; the orb was windowless and resembled a sphere of mercury.

I quickly ran to the window for a better look, but the sphere had disappeared behind a tree in the garden. It never reappeared from the other side, although I did notice a streak in the sky where it should have been, as if it had accelerated off quickly.

This heralded the start of many strange experiences around that time. These involved witnessing a shadow person whilst out walking one evening near an abandoned building with my flatmate, poltergeist activity around my flat and a "being of light" peering out of my window one night as I arrived home - the bedroom it had been in was icy cold when I went inside the flat to investigate.

I can't help but feel that the orb was an epiphany moment in many ways. It opened the floodgates to this whole new level of awareness. Interestingly, my then flatmate was dabbling in Magic and claimed he was receiving information about the true nature of existence from a spirit entity via Automatic writing. He did have a rather extensive hand written essay containing diagrams and text which he said was channeled to him nightly. I wasn't allowed to read it sadly, so I cannot comment on its contents!


Many years later in 2015 I found myself living in Yorkshire in Hemingbrough, a small village not too far from Riccall interestingly! My daughter at the time was 5 and wanted me to take her kite flying at the local park, so on the first windy day we could find, we took her large pink kite out.

I'm not sure at what point it happened: I seem to remember I was in the process of reeling in the kite at the time. It was very high and I was cursing how much of a fight I was having reeling it in when this large amorphous blob of red materialised next to... the kite for a few seconds as if it was analysing it. Then it suddenly faded away to nothing.

I can only hypothesise that the kite had attracted it. Perhaps of its garish colour?

It was around this time I had a number of other odd experiences. Our home at the time was a 18th century farm house and I would often catch glimpses of a middle aged women in a dressing gown staring at me. The first time I saw her I got the shock of my life, I had just come out the toilet and she was standing at the top of the stairs, I cursed loudly thinking it was the wife for some reason, only to look again and realising no-one was there.

I soon learnt to accept our regular visitor and never felt 'too' scared when I witnessed her over the years.


In addition to all this I experienced a bright flash one night whilst driving home after a late shift. I had just finished work and was turning left at the junction at Eggbourgh Power Station and the A19 heading towards Selby, when there was this intense bright flash which illuminated everything. I jumped out the driving seat in panic thinking I had triggered a speed camera, then realising there is none at that location!

It's my belief the flash of white light was metaphysical in some way. There is nothing on that lonely stretch of road which could produce that flash!!?? No street lights, no houses, Nothing! I have since looked into this and found that many people have experienced a similar thing! It seemed to illuminate the inside of the car, not the landscape outside!

So how do I conclude? I think many of these UFO experiences are precursors to further paranormal encounters. They open awareness to perceiving our reality differently. Perhaps without knowing it, we then discover a new way to think or tune into different energy frequencies. So we experience further strange things! You asked for an epiphany on Bempton Cliffs one day and instantly got one! I think you're right about certain areas being more active than others. Almost as if the fabric of reality is thinner in these places allowing beings such as Dogmen or energy such as ILF's from alternative frequencies of reality to slip through, either accidentally or by choice.

There are many documented places such as this! I believe it may be linked to the earth's magnetic fields or lines in these places. Much of the work of John Keel discusses these concepts further. The black cat phenomenon you discuss could also be linked to the above in some way as well. Witnesses of these cats maybe experiencing the result of a time slip. Again a very well documented phenomenon.

Finally, I was fascinated by the MIB experiences you have wrote about and I couldn't help but wonder if these are in someway related to gang-stalking, which I'm certain has a demonic connection based on my own research. If you require further experiments to try out in the field, perhaps you could try praying or meditation and seeing what effect this has on conjuring up activity.

Perhaps even a high power laser pointer with a good range might attract more than you bargained for! If a pink kite can conjure up things, than a powerful laser pointer may also work.

Anyway, sorry for the long email. I hope your well and remain Coronavirus free. If you choose to try any of my recommendations I'd be fascinated to hear about the results. 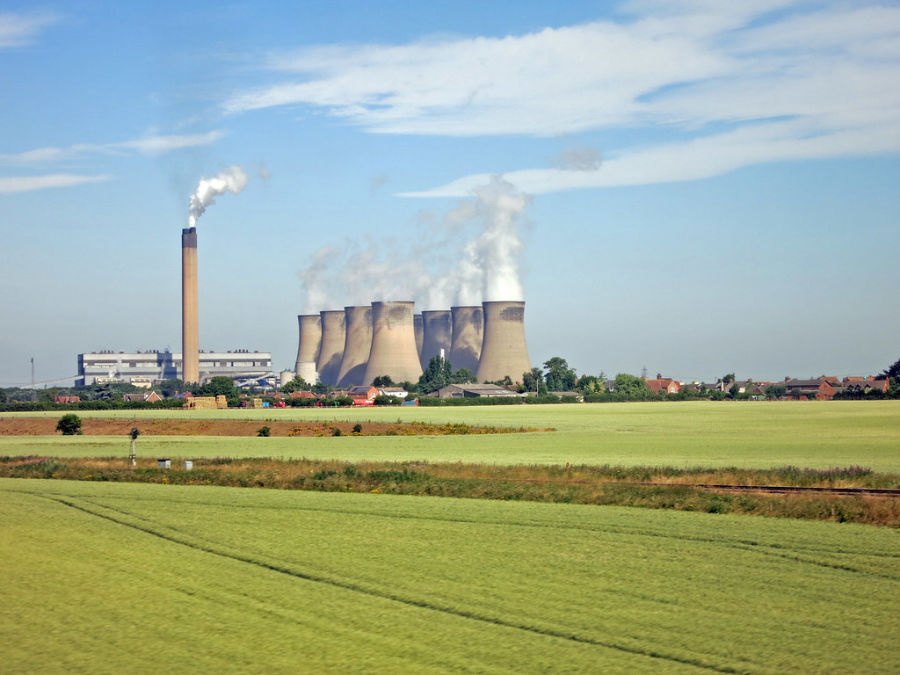 Countryside around the power station which closed in 2018