from informal e mail to Paul

Hi Paul, I received Truth Proof 2 and I'm thoroughly enjoying it so far! I listened back to Howard's Sunday show and was pleasantly surprised to hear you on again as a guest.

Which has prompted me to email you about my brief sighting I had years ago, as I had mentioned. It was either 92 or 93, because I had just moved from Thurcroft Colliery near Rotherham, to working at Kiveton Park Colliery. (we had just had the car park at work upgraded and had some new lighting over it, that was bright white/yellow like Halogen as I remember. Please see attached map)


- I was driving from Aston (1) to Kiveton and a bright light caught my eye towards Wales Bar over the LUK factory in the Industrial Estate (2).(Roughly half a mile away).

My immediate thought was it was a light over the car park, like at my work. But it was too high, 3 or 4 houses high. A bright white/yellow ball of light - my guess at that range - it was about half the size of a small car. It was stationary to the best of my perception while I was driving.

I could see no other structure around it. It then shot vertically up, I would estimate a 100 ft and vanished/switched off. Then I simply had the strongest weird gut feeling, that it was all wrong, it shouldn't have been there, it was in the wrong place- for the want of a better word: it was Alien to this place.

It all happened in a very brief period of time, a few seconds but it has stuck with me for years. I know it's not very dramatic or exciting to what you are used to!, but overall I hope the sighting helps in some way with your investigations.

Paul replies: all these sightings are really interesting. Granted some may have mundane explanations. But you need only one truly inexplicable sighting to make a valid phenomenon.

correspondent who wishes to remain anonymous 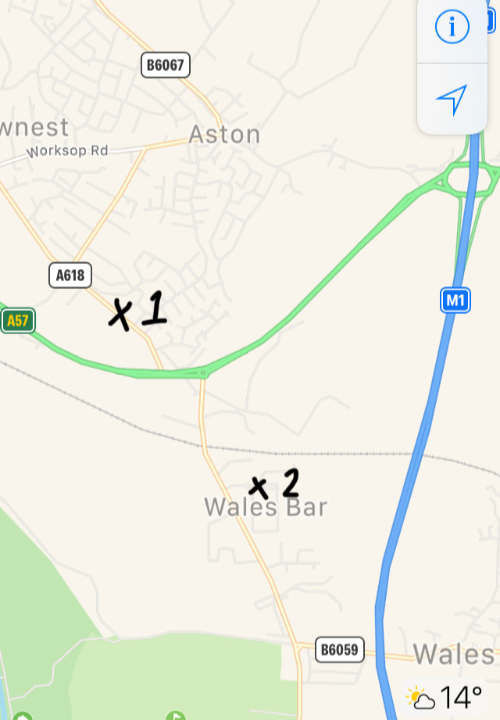 drive on which UFO was seen. See report.