A man and woman came to Flamborough on Friday 31st of January 2020. They arrived about 8.30pm.

They parked the car and decided to walk to North Landing. They walked to top of car park then down the earth steps and stood on a bridge overlooking a stream. Between a ravine that drops down to the beach below. Locals in Flamborough call its Holmes Gutt. The cliffs there are about 80 to 100 feet.

They said it felt spooky so they decided to return to the top. The sky was clear and bright and moonlit. They could see the cliff outlines clearly. As they stood looking out to sea they suddenly noticed the very large outline of an animal, a dog of some kind. It was sat on an outcrop of rock called a Nab: talk about its extra-long front legs. And the Starlight express comparison.

At first they thought it was a statue or carving of some kind. But could not understand why they never saw it earlier.

Lee is 6 feet tall and they both estimate this thing to be at least 6 feet in the sitting position. They had a phone camera a good quality 4k camcorder an infrared scope and a DSLR. None of the cameras could pick up this creature despite being able to see its outline clearly in the moonlight. At this point they still thought it was a statue or carving of some kind.

Then Lee heard a low pitched growl and it began to lower to the ground. They watched it slink away on all fours into the darkness. At this point they were very scared and went back to the cottage.

It is interesting that the 3 Parra werewolf story was from February the 7th 2019: a year and 7 days between the sightings and less than 3 miles apart.

The couple were so confused by what they had seen that they decided to get in the car and drive back for another look. They saw nothing. When they arrived back at the cottage they looked on line for unusual things in the area. They contacted me at close to midnight, that same night. I met them the following day with Bob Brown and we went to the location.

A few days later I placed a bit about the story on social media. Luckily the lady of the couple stepped forwards and contacted me to say she was the one who saw it. 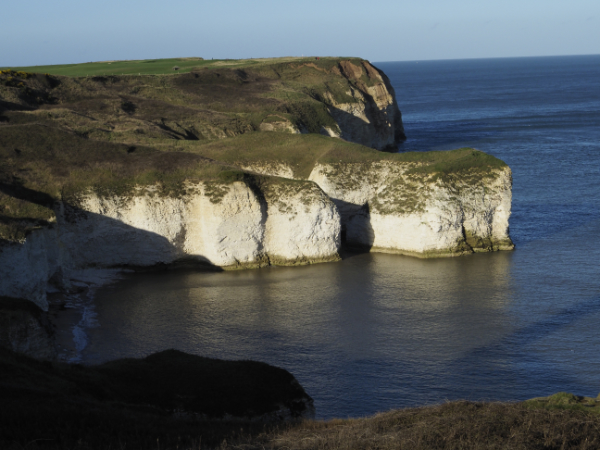 this chalky soft coastline is home to thousands of birds in the season.