My partner and I saw an unusual orange light on Saturday 13th August 2022.

We had taken our 2 dogs for a walk on Lyth Hill which is just outside the village of Bayston Hill, south of Shrewsbury in Shropshire.

It was late in the evening as it had been a hot day which prevented us walking them earlier. At approximately 22.45 as we were walking back towards the main car park (heading north) I saw a bright orange light suddenly appear in the direction of Much Wenlock (East).

My partner also noticed it and asked “what’s that?” and while we were watching, it faded similar in effect as to when you turn a light down with a dimmer switch until it was completely gone. It was visible for approximately 30 seconds and appeared stationary.

At was approximately the size of a pea held at arms length very bright orange and I think about 45 degrees above the horizon (Wenlock Edge).

The sky was extremely clear with a large full moon visible. A meteor shower had been reported to be taking place over that weekend but this certainly didn’t look like a meteor as it was stationary, low on the horizon and circular in shape. I have attached a photo of the area of sky where we saw the light.

We are getting reports like this on an almost daily basis, Geoff. Thank you for the trouble you have taken with details and a photograph of the vicinity. If you type the word "orange" in the search box on the Reports Forum main page, you will see that currently 17 reports of orange lights come up, nearly all in the past couple of years. What are they? 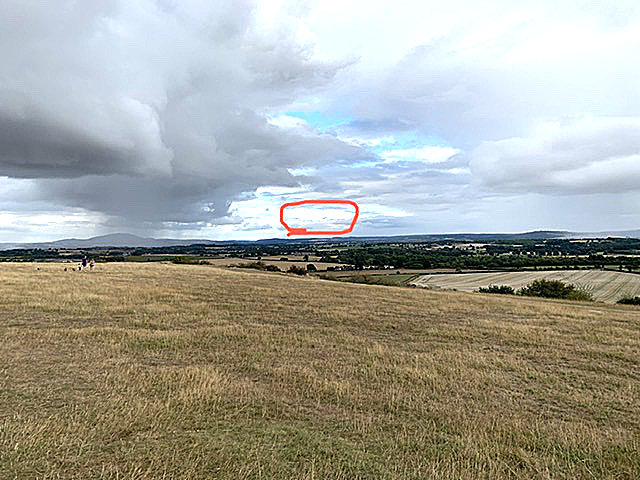