Wednesday 10th August had been another scorcher of a day. After a long hard days work, I was looking forward to sitting in the garden drinking tea and chilling. When I got home mid-afternoon around five I changed into shorts and t-shirt, made a cuppa and sat in the garden. I put a speaker on and started listening to a YouTube video.

After a while of periodically looking up into the sky, something in my head said to get my binoculars and skywatch as I call it. Now, it’s a big sky and why look in one part rather than another? Well I can only say that I was sitting down facing north to northeast and once the decision was made to get my binoculars out I was only consciously prepared to look the same way. Whether this was influenced by anything I do not know.

I was on my own at this point. Within minutes of searching I spotted something. It appeared to be like a metallic ball although I couldn’t exactly define its shape. There seemed to be either one light or two emanating from it although I concede it may have been the sun's reflection.

The position of the object never changed in the sky and after around five minutes I called to my youngest son (20 years old). He come into the garden and I explained what was happening. He is aware of my interest and has seen me skywatch numerous times. I passed him the binoculars and he tried to find the object. It took him around five attempts before he too spotted it.

I decided to go and get my camera. Although I needed my binoculars to be able to see it I thought a zoomed photo or video would also capture it. I retrieved the camera and started taking photos and videos in the general direction of where I thought the object was positioned. After a good 30-40 minutes since originally spotting it, my wife returned home from work. She joined us in the garden and I passed her the binoculars to see if she too could witness it.

After a couple minutes of trying she did see it. For the next 20 minutes or so the binoculars were passed between the three of us to try and maintain the sighting.At this point I realised I had to charge my cameras battery. I will also mention that we are in the flightpath of a lot of planes from Birmingham airport and at least twice I thought it had gone when a plane flew in the vicinity. I cannot say for sure that it did but whenever a plane appeared in the distance the object kind of disappeared.

Now, while my wife and sons interest started to wane, my enthusiasm didn’t. I am so glad it didn’t otherwise I would have missed what happened next. The whole time of the sighting the object's shape or position in the sky never changed. But then I started to notice a shadow of some kind appearing to its bottom right like a kind of faded line. Over the course of a couple of minutes this shadow grew as did my excitement as I realised what I was seeing. The shadow became more visible and larger then I realised the object was now showing itself to be a cylinder or cigar-shape and the main body was rotating into view in a clock-wise fashion. (see my diagram, below)

To say I was amazed would be an understatement. This was visible for another couple of minutes or so. I passed the binoculars to my wife and and then son but they couldn’t see it anymore. At this point I strangely had a feeling it was no longer there and when I again tried to find it I was unsuccessful. After numerous efforts I finally gave up.

I have no idea of the size but I do believe it was some miles away. I regularly see aeroplanes from all angles and distances with normal eyesight and my binoculars make them seem much closer and more visible. This object could not be seen without the binoculars from my position so I believe it was far away or should I say very high up. Interestingly both my wife and son felt it had slightly more shape to it rather than just a round object.

Clearly it is an unknown object and there are many questions as to its behaviour, never mind what it was. Why did it stay fixed in the same position for so long? Did it’s size determine how slow it rotated and re-positioned? How could it seem to just disappear?

I have always maintained that unless you look up you won’t know what’s there. And I know from experience that there are things up there just beyond our sight.

A very interesting sighting, confirmed by your family. By using the Search facility on our Reports Page you will see that we have two other reports from your part of the world, numbers 76 and 152 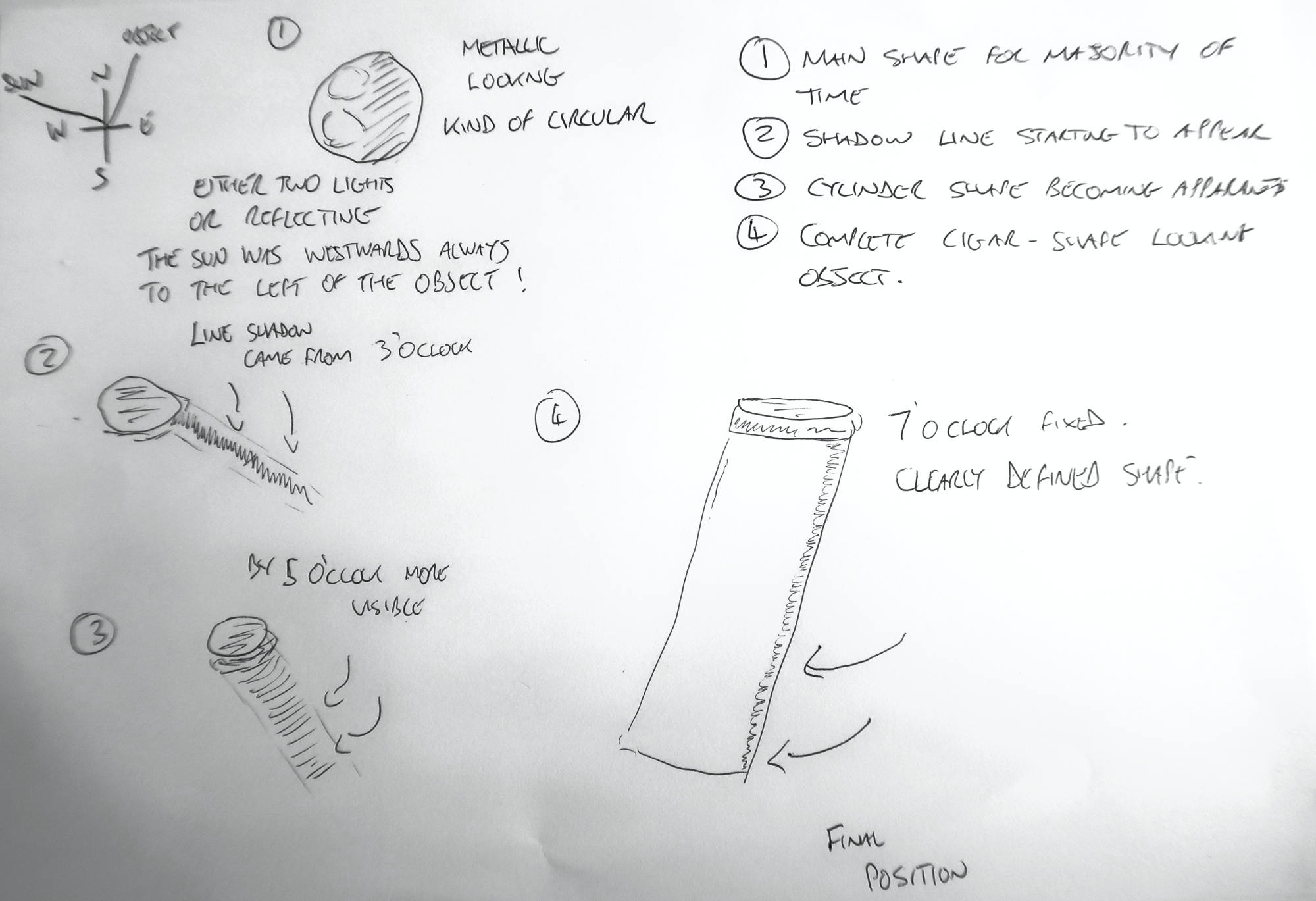 Karl's drawing showing changes of shape by the object