Observer - 6 X members "All the Above Group'

Incident - At approx 2100hrs members of the group took up position on top of Skipsea Castle Mound to conduct a meditation and skywatch session.

Our view of the night sky was limited as there was partial cloud cover however this began to disperse at 2145.

At 2220 a white/cream coloured object (similar in size to a large star) was initially observed, appearing to be high over the sea, to the E of Flamborough Head. For orientation, the object was to the NE of the observers, and heading S. The object was moving slowly in a haphazard fashion, appearing to "waggle" along a zigzag course, heading generally S. It was seen to "jump or flick" forward through the sky at a high speed (twice) and then slow down and continue heading S .

The group was able to observe the object for just over a minute before it changed course and headed inland (possibly towards Hull) and we became unsighted due to the corona of the moon.

Comment - Members of the group described the object as moving "like it was waggling", "it was swimming like a tadpole or sperm" and "seemed to be organic".

The way the object moved was unlike any aircraft that any group member has seen, in particular its variations in speed and unusual progression along its course.

No sounds were heard and no other lights were visible on the object.


Paul: Hi Kez, thank you so much for taking the time to send me the report. I would if it is ok with you like to put it onto the truth Proof website. After reading what you have put it does not sound like a satellite. Or an aircraft and I would think you would know with your military background. The variations in speed are very strange and the way you described it appearing to jump forwards. I don't know any aircraft that can do that. Thank you Kez. 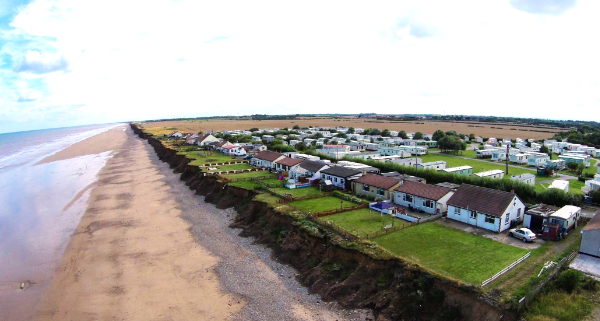 Skipsea coastline showing extensive and continuing erosion by the sea.