Morning Paul, just a couple of pics I took on Monday.

There are two objects in the sky that I can’t explain, not balloons or drones or planes or lighthouses 🤓. They moved in to the flight path from Manchester.

I didn’t have my cameras as I was fishing but still took the photos, I always check for the obvious answer, the only thing I could think is large black balloons that were disk shaped But, they turned on their edge to look cylindrical or cigar shaped.

Not the best photos but they never are 😁

The lower object seemed to fade out whilst the higher object went in to the flight path then started to rise upwards until it was in the clouds. In fact Paul, it’s the air space I see from the front of my house, near the Snake Pass in Glossop


Paul: Interesting report and well observed. From the quality of the photograph it is really difficult to see what they might have been, although there is no obvious explanation. If you zoom in to the photo with photo software, the larger object appears to be a black rectangle surrounded by some sort of gas/plasma/heat distortion. However these are more likely to be artifacts caused by the photography and compression of the image. I would rather trust your eyes! Thanks for the report. 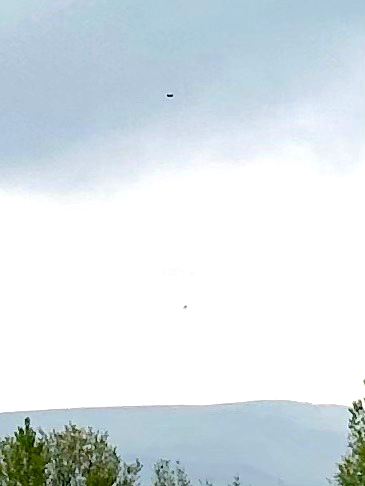