I was hitchhiking to the 'Big Chill' festival at Eastnor Castle, Herefordshire, on Friday 1st Aug 2008, around 3 - 4 a.m. (no drugs involved). I got a lift from Bristol to Tewkesbury and walked from there.

I was with a Polish lad 'Jakub' who I met at the Glastonbury Festival earlier that year. He did not see what I saw (I'm guessing he had his head down as he was dragging a suitcase on wheels behind him): he was about 20ft behind me. I was trying to keep up the pace to arrive at the festival before 6 a.m. when we were due to start our stewarding shift, which we signed up for to be able to get into the festival for free!

We set off really late so it was about midnight when we got to Tewkesbury and walked westwards along A438. I estimate we were somewhere between 'Sledge Green' and 'Rye Street' because I remember soon after the sighting being on the bit of the road which crosses the B4208.

As we were frog marching down the road - as best as one can frog march carrying tents and other camping gear - something caught my a attention out of the corner of my eye. It was high up, above the clouds to my front and left. It was a mainly clear sky with a few clouds & barely a breeze. It seemed like a UFO 'charged up' and then shot off at 'warp speed' upwards and westwards at a shallow angle of incline. It left a small trail behind it.

If I had to describe it, it was very very bright white & shaped like a sperm with a straight tail because of the speed it shot off: it was like something from 'Star Trek'.

There was no discernible sound to the craft. 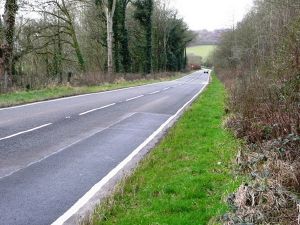 a challenging road to hitch-hike along