This is a 'historical' report mainly, and quite varied. I am submitting it after starting to read Night People by Paul (great read!) and recognised a bit of similarity of one incident with Paul's early sighting over Mexborough and one my parents had. Some of the other experiences below are straying off the path a bit, but I thought I would include them.

Coincidentally, although brought up in Bolton, Lancs, I moved to Sheffield in the '80s then through work moved to Parkgate in Rotherham. So I know Mexborough a bit and a few years back I walked along the canal there a few times. Going over the Railway bridge, having parked on Church Street. I've driven through Old Denaby a few times too, so I could sort of envisage the backdrop to what Paul wrote about early in the book.

I can't remember exactly when it was, but it was around the mid to late 1970's. My parents were driving home to Bolton, Lancs from the Lake District on a Sunday night in summer. They were coming over the Moors to the north of Bolton when they saw what they described as a bright shiny, slowly spinning circular object in the east, which was stationary in the sky. They were driving roughly north/south, the sun was still quite visible in the west and the object appeared to them a similar size to seeing the sun in the sky.

They watched it for a short while then it shot off at high speed. My youngest brother was with them but he was asleep in the back of the car. He was born mid sixties and would have been around 10 years old at this time so, as stated, it would have probably been mid 1970s. They never mentioned any missing time. My mother was open minded about it but my father thought it was "something from the government".

Along with my dad, my eldest brother was an out and out sceptic about anything out of the ordinary or paranormal, so at the time he thought it was "rubbish"! However, he later had his own sighting of a UFO. I think it would be late 1980s; he was going home late afternoon from work in Preston, Lancashire. It was winter, so it was dark. He lived in Bolton at that time and, coincidentally, his sighting was roughly the same area where our parents had theirs many years earlier, a moorland area near Winter Hill, north of Bolton (a bit of a paranormal hot spot apparently!).

He said he saw a large rectangular object in the sky which, from memory, he said was a luminous blue or purplish colour. He watched it for a few minutes whilst driving and couldn't understand why other drivers seemed to be ignoring it. I had moved away from Bolton a few years previously and when he knew I was going to visit, he rang me up to arrange to meet me beforehand in a pub and told me about it. I was quite surprised when he said he had seen a UFO. As previously stated, he was a definite non-believer and would get annoyed when such things were mentioned. It obviously made an impression on him!

Looking back, some members of my family also had 'paranormal' experiences. My mother woke a few times over the years to see people stood at the foot of the bed just staring at her.

Later in life she said one of her deceased sisters visited her. She had felt unwell one night and had gone downstairs to sit on the couch so she didn't disturb my father.

As she sat there she said the wall sort of dissolved and her sister (looking a lot younger) walked through, smiling and told her not to worry it wasn't her time yet. She said she knew that there were other people behind her sister but couldn't make them out properly. She said she was wide awake when it happened.

I sometimes think that when people appear but do not speak they are subconsciously transmitting messages, which sometimes might be warnings. Around 2015/16 my father said a man came into his bedroom whilst he was awake. He said he held out each hand which had a sort of coloured spinning disk in each and it greatly upset him. In 2017 my sister and my youngest brother passed over, and I think that the visit may have been some sort of warning.

Not long before this, my sister said she woke one night to see an old man in the bedroom staring at her but not saying anything. Not long after she was diagnosed with cancer. A year or so later I went to visit her in Wythenshawe Hospital after she'd had a long operation and she said she thought she'd been on a UFO during the operation. It could have been the medication but she'd never ever shown any interest whatsoever in UFOs previously, so I don't know where it came from. Unfortunately, due to us living quite a distance away from each other and her failing health, I never got a chance to discuss it further with her.

Not long before she passed and was at that time in hospital, I had gone to bed just after midnight. I next remember having a 'dream', where I was in a corridor talking with her. I could see everything clearly and it was though I was actually there. As we were talking she started to look unwell and be losing consciousness. I held her up and asked her where her room was to take her back. I straight away woke up then and looked at the bedside clock thinking it would be early morning but it was exactly 1am. The next morning I received a call that my sister had gone into a coma from which she never came out of. Before I mentioned anything about my dream one of her daughters posted on Facebook that she had woken that morning at 1am and couldn't get back to sleep.

Personally, I've never seen any external phenomena however, in the 1970â•˙s I had a period where I used to dream about UFOS nearly every night and sometimes being on them but no interaction with 'aliens' that I remember. I have had the odd few spontaneous out of body experiences over time, nothing spectacular, but I have noticed an alteration of my senses during them, such as being able to see everything in focus over 180 degrees or more i.e. being able to see everything at once rather than focusing on just one area.

In another experience I found myself overlooking a golden city that seemed to be in space and in the background I could hear a choir of voices singing in praise of the Sun (or Son, though I'm not at all religious or 'new age' spiritual etc). Also, the singing wasn't linear it was 'all at once'. This seemed natural at the time but hard to explain 'here'. One incident which could be something or nothing. In July 1970, myself and nine friends drove in a van to Lloret in Spain (about a 1000 miles!) for a camping (booze up!) holiday. One of us had done the trip before a couple of times by motorbike, so he knew where best to stay en route through France and on the way back. I remember we stayed at a campsite on the way there but on the way back mid France we ended up off the main route somewhere and just parked up at the side of a quiet road. Apart from a small restaurant just down the road where we ate that night I donâ•˙t think there were many other dwellings about. We usually wanted somewhere lively with bars etc.

In the morning everyone was in a subdued mood and just wanted to get going. Some of my friends were saying they woke up in a different place from where they went to sleep. I thought a plane had crashed in nearby woods during the night and exploded in flames! A bad dream? But I still have the image in my mind as though I was actually looking at it and remember the direction from where we were that it 'happened'. We were avoiding eye contact and uncomfortable until we got away from there and on our way. There is a feeling associated with this that I canâ•˙t exactly describe, like a sort of guilt/being somewhere you shouldn't. Why did we stop there with no facilities for washing etc. Nowhere to get breakfast etc. I don't remember it being discussed beforehand and have lost touch with the others.

Hope you find the above of some interest. I wasn't aware of the Truth Proof web site before seeing you on Dreamland/Whitley Strieber. I've followed Whitley's experiences on and off for years after seeing him on British TV years ago. On a show with some astronauts and being criticised by them. Times have changed a bit!

There are that many theories about it all these days that I don't try and form any opinions. It is what it is. Whatever it is though, appears to be coming into people's lives in varying degrees (some beneficial and some not apparently) and people have to make of it what they will through their own lens of experience/upbringing etc, and, as in your case and many others, thankfully share those experiences with the rest of us. ..................

P.S. It takes me a while to write things down and in between I've been watching a few of the podcasts and heard Ley Lines mentioned a few times. A possible one I thought I'd mention, as you may know someone who might be interested, appears (on a map) to go through Sheffield Cathedral, then close to Rotherham All Saints Church, and through Conisbrough Church and then the Castle, and on to the centre of Doncaster. Seems a bit of a coincidence.

Hi Ron. Well, your parents' original sighting seems like a classic, and who knows what might have happened. And of course there is the phenomenon that themes and events often seem to run in families. Once touched, family members seem to be open to access by, whatever! Thanks for taking the time to share this long and fascinating profile. Do let us know if you have more experiences..... 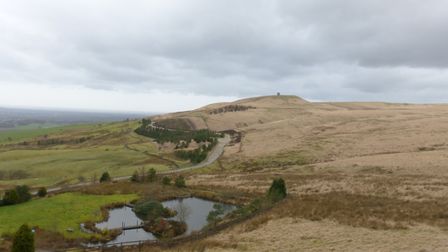