It was Saturday August the 2nd 2009, my partner and myself was attending The Big Chill festival at Eastnor Castle deer park in Herefordshire.

We had been down at the festival for most of the day and had decided to go back to the tent around 17:30 for something to eat. We had bought a large loaf of bread from a whole food stall down in the festival, which we were going have with some soup back at the tent. We arrived back at the tent warmed up the soup and ate the bread. Afterwards I filled the kettle up for a cup of tea, and placed it on a little single camp stove raised up off the floor on a small camping table, around 6.30 p.m.. I sat back in my chair in our living area of the tent about 1 metre away from the stove and began looking at the views from the entrance of our tent. The campsite was at the bottom of a valley surrounded by large hills some of which are the Malverns.

It was then that I noticed a small white light coming over the ridge in front of our tent about 25 to 30 metres away. I watched it move across the field in front me; it was about 5-10 centimetres off of the floor and the size of a 50 pence piece.

It wasn't going in a direct straight path but was meandering along as if it was investigating the surroundings. It disappeared behind a tent in front of us and then reappeared at the back right hand side. At this point it changed direction and began to follow along the side of the tent towards the front entrance. When it got to the front where the zip is, it stopped and began moving slightly side to side and then up and down.

At this point I thought to myself, its trying to get inside the tent, then instantaneously it sort of spun and did a 360 degree turn, and then a arc turn as if it somehow heard my thoughts. It then began to to move towards our tent, again in a meandering manner. This is when my partner began to also see it; she was further back in the tent, laid on the floor smoking a cigarette. The orb came into our tent and floated across in front of me. It abruptly came to a halt above the lit stove. It then began to move in a figure of eight type pattern. My recollection was that it repeated this about 6 times, although my partner recalls it repeated it twice before floating off and disappearing around the left hand side entrance to the tent. Interestingly to note the size of the orb remained consistent regardless of the distance away from us throughout the experience. Also it was self illuminating but did not give out any light. There was a feeling of calmness that came over me as soon as I spotted the orb; my partner reported the same feeling. And there was a silence in air which is impossible due to being at a festival. Looking back we realised we had watched the orb as if it was a matter of fact and nothing out of the ordinary; however as it disappeared out of our sight, we then looked at each other and said "WTF!"

I immediately jumped up and rushed out of the tent looking in the direction it went in. But I was unable to see anything. It was then at this point I noticed that the festoon lights which light up the pathways to and from the festival were switched on and the sun was setting, due to the hue of pink in the sky making it dusk. It was around 8.15 p.m.. This was not possible as we had just eaten our tea, and also the kettle which had been put on to make a drink never whistled to boiling point, and the stove was turned off.

At the time we dismissed what had just happened and carried on enjoying the rest of the festival, strangely. But looking back over the years we now realise what a truly bizarre experience we had. Absolutely no drugs or alcohol were involved throughout the experience.

Many thanks for taking the time to read about our experience. Steph J


Webmaster comments - again the sort of report that is fully credible that makes us wonder what sort of phenomena we are dealing with. Some would say a ghost-hunter's "orb", others maybe some sort of scout ship. Who knows?? 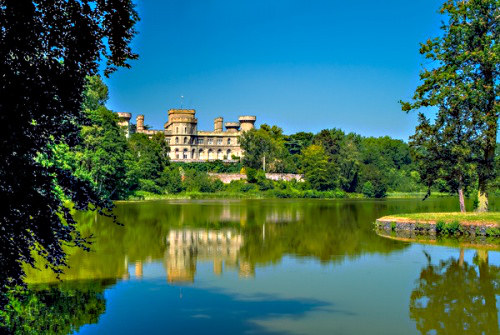