Report from Darren Gough. Posted following his submitting the story to the Truth Proof web site.

I wanted to share with you an event that happened to myself and some friends a few years ago up in Stainton Dale. Think it was about 1993/94.

My friend was having BBQ on his farm when myself and one other saw three lights heading west to east towards the sea. The lights where moving in sync with each other at about the speed of an aircraft. Then they seemed to twist around each other as if playing! After a few seconds of us watching, they increased speed and then shot off at incredible speed across the sea!

I turned to my friend and we both said at the same time "Did you just f@#king see what I saw?"; to which we both replied yes!

"Hope this is of some use to you Paul"

"Thanks Darren, it's one more of so many similar reports. They can't all be weather balloons or the planet Venus!" 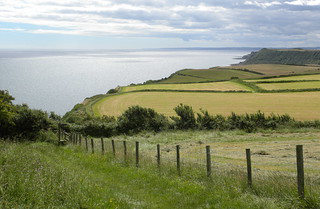