UFO over Radio 270, pirate radio ship, Bridlington Bay
Live real time broadcast of ufo sighting 1966. I was told about this sighting by retired coast guard from Hornsea. He told me they were at work listening in to radio 270.

"The boat that rocked" that was anchored off Bridlington bay.

Suddenly a DJ began getting excited and started telling the listeners that a UFO above the ship.

The coast guard said it was the summer of 1966. He said that they all stood with their mouths open as the DJ described the large luminous white sphere that he said seemed to be sitting in the sky just above the ship's mast.

After the coast guard told me about the sighting I decided to check if anyone from Radio 270 had any recollection.

It was after all 50 years previous!

I managed to speak with former DJs Paul Russling and Chris Dannet.

They confirmed that the UFO sighting was widely talked about at the time. The coast guard also told me that a light ship anchored off Spurn Point also reported seeing a large sphere of light in the sky on the same night.

Spurn is over 30 miles away.

A light ship is basically a floating lighthouse.
The official explanation was a weather balloon.......

If you are a Pirate Radio enthusiast, an especial thanks for calling in to this page. To reward your enthusiasm, here is a 45 minute recording of a wonderfully nostalgic radio broadcast by Noel Edmonds, about 40 years ago. You can really get a feeling of the excitement of the times. Enjoy, Paul....

If the subject of pirate radio interests you, consider joining the Radio 270 Facebook group 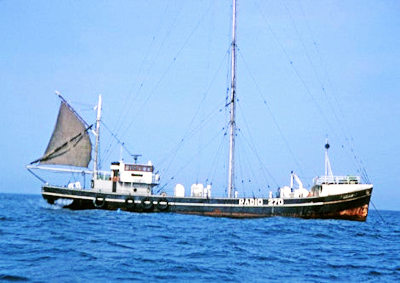 Try this! The boat that rocked... Hold your mouse over this image and be prepared for the real experience of broadcasting in the north sea.
This ship was moored off the coast near to Bridlington in the 1960s and had a good local following. It could be heard over much of England.