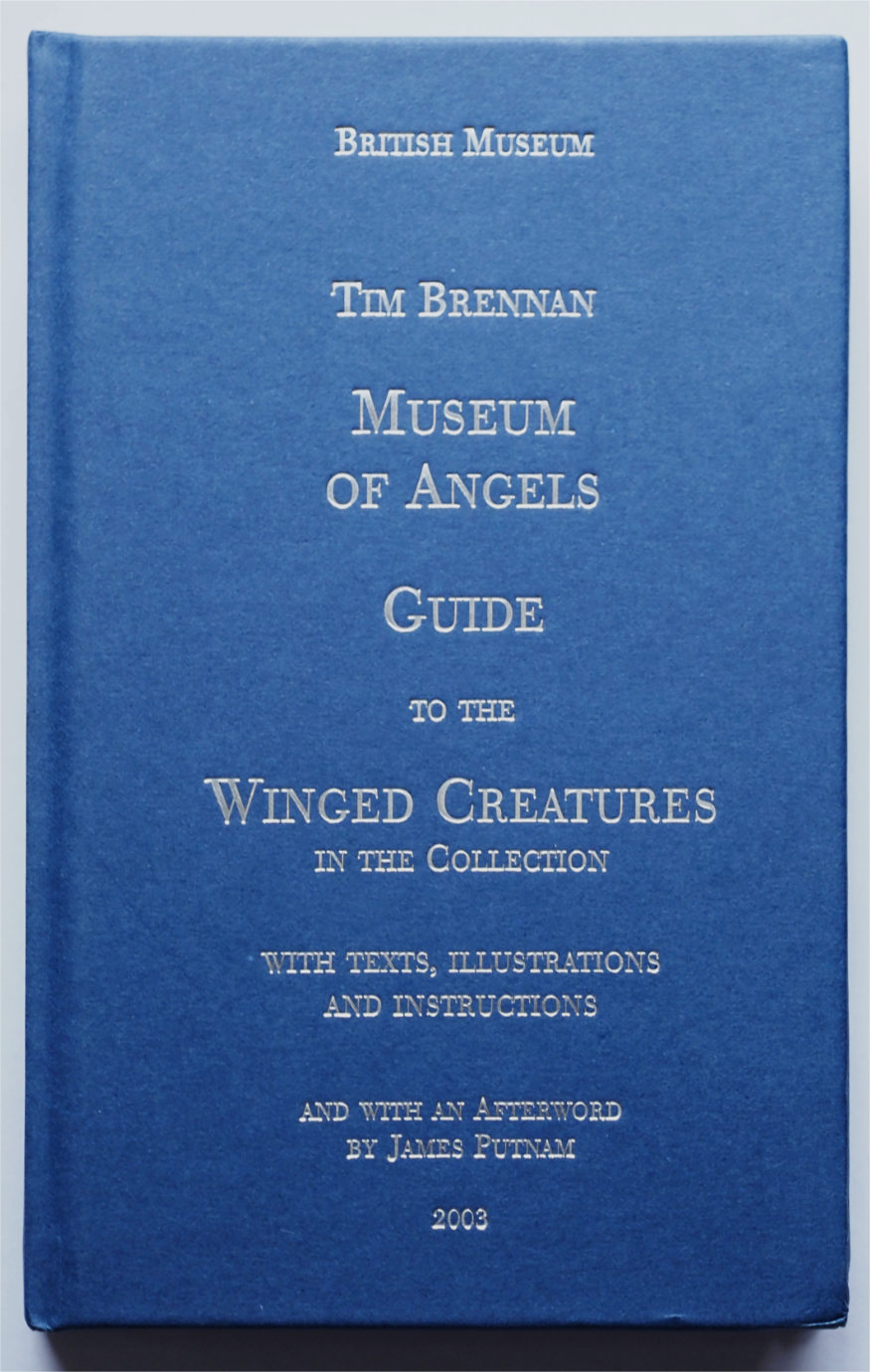 Museum of Angels: A Guide to the Winged Creatures in the British Museum by Professor Tim Brennan, 2003, London: Gli Ori.

A pocket guide emerging from Tim Brennan's year-long 2003 British Museum artist residency marking its 250th anniversary. The guidebook leads the walker through the world’s first museum, revealing the many artefacts and representations of angels on public display. The work also includes a never before researched and compiled fully comprehensive directory of angels held by the Museum.

Included is a forward by the author and an afterword by curator James Putnam.

Over 30 black and white illustrations complement the itinerary and quotations that range from religious to secular and magical selections. The journey takes you through many ages including ancient Mesopotamia, Babylonia, and the angelic communications of Doctor Dee and Edward Kelley in the sixteenth century.

A beautiful object as well as a must for anyone curious about angels whether heavenly, fallen or just indifferent.

We are thrilled to have Professor Tim Brennan’s book for sale on the Truth Proof website. It is essential reading for anyone wanting to learn more about angelic beings and their magical roles throughout time. The museum of angles is an interesting and informative read, that would sit equally well on the shelves of any museum or library. It offers information that cannot easily be found in mainstream publications dedicated to cryptid research.

(For those looking for a book that specifically covers winged creatures of the cryptid kind, this may not be the one for you.)

‘This is a special book, surprisingly illuminating and beautifully presented, promise yourself a visit to the Museum with it, unforgettable” - Flinton Chalk, Artist, curator and Achaeoacoustician.

‘Tim Brennan’s guided tour is remarkable for making links between every department of the British Museum.
Angels and winged creatures appear in many different historical and geographical contexts. Brennan questions the Museum’s collection and its reason to be by repeatedly pointing to those knowledges which the museum cannot cope with.’
Steve Pile, “In the footsteps of Angels: Tim Brennan’s ‘Museum of angels’ guided walk” , Cultural Geographies, Vol 12. No.4 (October, 2005).

‘Take this book, and take it on a visit to the winged creatures of the British Museum, as with it in hand as if through a glass darkly you’ll find multitudes’ ~ Heather H. Yeung, poet and maker

Thanks to a collaboration between Philosophy and Art, the 20th Century Cliché of the ‘Angel of History’ is that it flies backwards, in the form of a mass-reproduced lithograph, against or in the face of a storm. It is a single ‘angel’, an inhuman force that somehow repels and troubles us, and is preserved, static yet straining towards the possibility of movement.

Is that really what our angels in the c.21st are? Is this really what our c.21st philosophy of history might be? The given name of that c.20th angel was the ‘Angelus Novus’ (and before then ‘Conquered Fort’, and ‘Ruins and Hopes’), which cannot be new or news to those of us who are reading these words, now… It is out of date, but we have not replaced it. I first walked the British Museum with Brennan’s Winged Guide in 2010. The guide was actualised and first given life in 2003. I write this in 2021.

A lot has happened to the idea of the museum, to the idea of history, between these years. A lot will continue to happen. But what the guide made me realise was how wrong the cliché interpretations of an ‘angel’ of ‘history’ are. The winged creatures of the British Museum may have whispered to me… but they will surely continue to whisper in different ears, perhaps in different guises and configurations, and exert their strange and renegade presences as if water reflected in an obsidian mirror. Museum visitors will continue to notice and not notice the winged creatures, slantways. But if you wish to find a way to break with the clichés and monoliths of history, of philosophy, of the museum, to break with a c20th singular image of ‘the’ angel, I exhort you: take Brennan’s guide and allow it to influence your movement through the collections of the British Museum. You will notice differently, hear new voices, and discover new collectives within the collections.

Let thought be lateral and take wings, and trust this small blue book and all it contains to show you a potential future way of thinking our c.21st histories and philosophies, because with it in hand you have happenstance multitudes, and, with the winged creatures of the collections, will never fly too close to the sun. ~ Heather H. Yeung, poet and maker

‘This beautiful blue and silver book of monochrome pages offers a guide to the British Museum - but one that subverts - the stolen, colonial artefacts - liberating them back to their true purpose, recognising kalpas, aeons - a Time that has seen Empires come and go, forgotten, hidden beneath waves of sand.

Professor Tim Brennan acting as guide - collapses great narratives of time - his psychopomp - interrupts our concept of present time with the aid of intermediary beings - who wake us - as Brennan also assists us in waking them. One may only see the miracle coming if one forgets oneself - trampled egos - before the angelic, terrifying, wrathful, intermediary beings of antiquity.

We are led in by the guide, he encourages us to reflect on them - all the while we are forgetting ourselves and the time we just left - we enter into a seemingly past age - a double causality - it appears as a magic of chance - where Brennan may be opening the doors and yes we are led in by his psychopomp - but the magic of chance is now ours - for the theory of double causality is a distinction between existence and experience - the outcome of double causality is conversely that nothing happens by chance, insofar as everything not caused by the past, is caused by an unknown future - for chance without cause cannot exist, for the mere fact of observing it endows it with a cause that is hidden, because it is the future even as we think we are staring in our present, into the past. Intermediary beings, angelic entities are the archetype of the threshold - Brennan as guide is holding the door of time ajar - as time, past, present, future - blows in.

This beautiful blue and silver book of monochrome pages offers a guide to the British Museum - but one that subverts - the stolen, colonial artefacts - liberating them back to their true purpose, recognising kalpas, aeons - a Time that has seen Empires come and go, forgotten, hidden beneath waves of sand. A double causality, a psychopomp from an unknown future - only known now, briefly, to the end of of this sentence - but disbelieved to those reading it - replaced them all with exact replicas - and no one has noticed.'

If you would like to send us your own review of a book sold on this site, please follow this link

Don Lodge    a concise kaleidoscope of angel information - witty, challenging and academic. Great for all historians, angelologists and explorers of the hidden realms.   *****